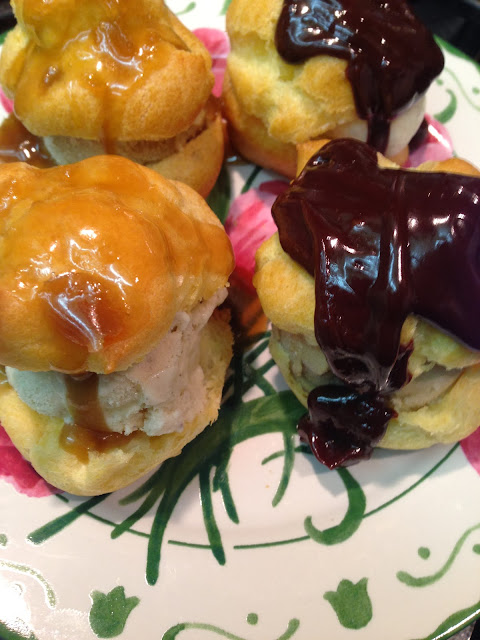 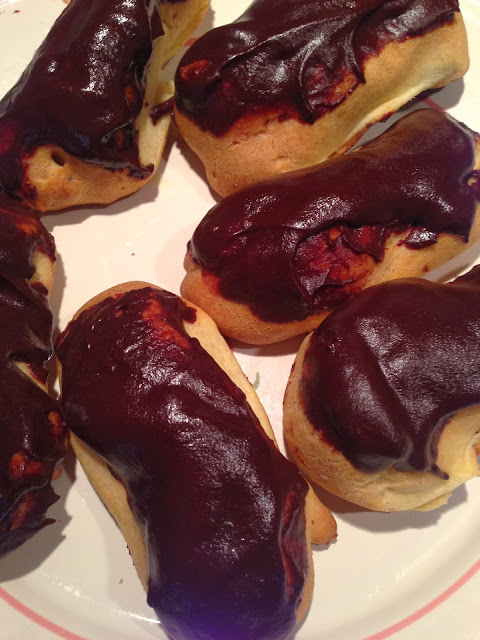 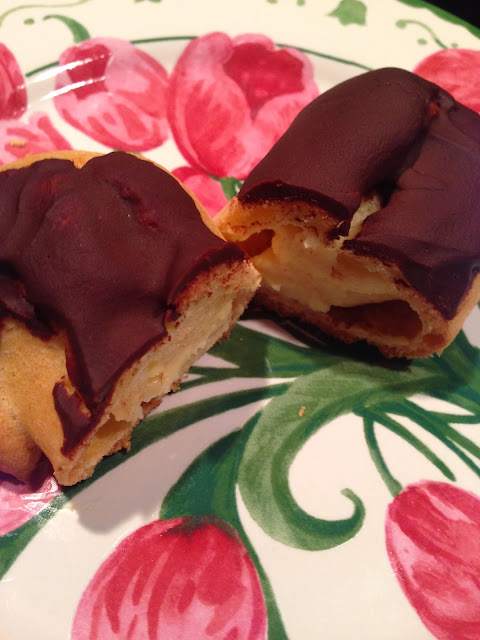 So here it is five years later and I'm back. A lot of things have happened in the time since I last wrote here. I moved. I was laid off from my job and am now basically self-employed. But most importantly I believe that I have finally found some peace and happiness. While it may not always be easy, I like where I am most of the time. But there are some things that never change. 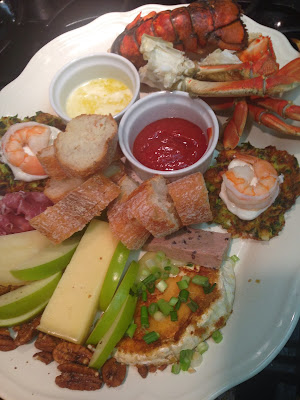 I still make my tray for New Year's Eve but this year I decided to also make a dessert. 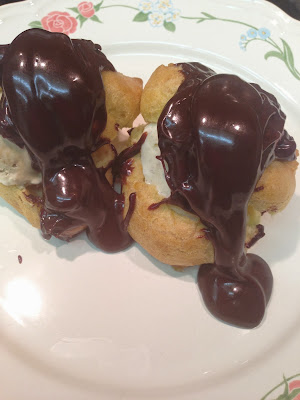 Profiteroles! The recipe called for coffee ice cream. I decided to mix it up and do half with vanilla bean ice cream. Tasty but a bit of work. Not sure if I will repeat the recipe. Who am I kidding? I will because one day I will conveniently forget the true amount of work involved. In the meantime, Happy New Year's!
Posted by Dagny at 10:33 PM 2 comments:

So I am thinking about returning. A whole new me.
Posted by Dagny at 9:02 PM No comments:

That's all she wrote

There are times that I have questioned this all over the past year. I just don't have it in me anymore. Really. There's nothing left to share with the world at large. I delve into my brain, my heart for something new and there's -- nothing. Perhaps one day this will all return in some new incarnation but for now I'm content in walking away. (I wouldn't hold my breath waiting, though.) So much so that I wrote this post a week ago. I take that back. I wrote the first version of this back in September when I thought that my stepmother would die within a couple of weeks. I think it's the longest that I have let something marinate. And it still feels right. So much so that I have also spent the past week paring down my subscriptions in my blog reader as well. Baby steps. But this? This has to end.

Thank you for coming along for the ride. It's been real. And sometimes it was even fun.

Off the couch for now

So many thoughts in my head. Where to start? I am the queen of stream of consciousness though so let's just let it flow.

First of all, thank you to everyone for your comments. I just don't have the energy to respond to them individually like I usually do. Hell. Most of the day I thought that I did not have the energy to even write another post -- ever. But now I've remembered how writing it all down helps me to find my way back.

My stepmother's death was not unexpected. It's just that there is nothing that can ever prepare you for that moment. And I'm still hurting sooo much from the loss of my aunt. I mean it's only been a little over three months.

My other aunt told me this morning that the hospice folks have arranged for grief counseling for the family. She has signed my dad up. She insisted that I needed to go as well. I told her that I'd call the folks at Thrive on Monday. I mean I did already check into the whole thing back in May.

Mostly I'm trying to make sense of why I hurt so much. My stepmother and I had a rocky relationship most of the time. But it was getting better in recent years. And she's been a part of my life since I was 9.

But mostly I think that my pain comes from my father. I started grieving for her months ago. He's just starting. And he is in so much pain. He keeps saying that he's worried about me but I'm sure I'm more worried about him than he is about me. He's one of those guys who needs to have someone there. He doesn't have the nomadic soul that I do.

This evening was filled with phone calls to his best friend and his cousin. We're approaching the holiday season. Holidays in the past were at my dad's house. I think he needs to be somewhere else this year. We all do.

I called my mom earlier in the day to let her know. After she spoke with my dad, she called me. She said that my dad kept going on about how I was now his closest living relative. (For those of y'all new around here, I am an only child.) My mom told me that I need to get up to Sacramento immediately. It was pouring rain here all day though. I just couldn't pull it together enough to drive up there today. Perhaps tomorrow.

And my dad's in-laws are putting the pressure on. They want a Catholic service even though it's been years since my stepmother has set foot in a Catholic church.

Oh, and the weight loss has been going along swimmingly. Just not fast enough. I still can't fit into any of my black dresses. I think I'll be going out shopping for a body shaper in the next couple of days. That's easier than going shopping for a new dress.

And Fluffycat and Zombie Mom? We're still on for next Saturday. Even if I have to drive like a demon from Salinas. Because I think I'm going to need that night out by then.

But now I'm going to resume my fetal position on the couch.
Posted by Dagny at 7:40 PM No comments: