So it's quiz time again. This one I think is just perfect for folks like Gloria.


?? Which Alcoholic Drink Are You ??
brought to you by Quizilla
Posted by Dagny at 10:20 PM No comments:

So it wasn't that bad

After it's all been said and done, having to go to work today really wasn't that bad. I had a highly productive day. In between bursts of productivity I was also free to surf the web to my heart's desire because for most of the day there wasn't anyone else around to say that I couldn't.

I ended the day by stopping off to see my real parents. I guess I should explain the real parents thing. I like to think that I have two sets of parents.

Having been raised by two people who were rather dysfunctional most of my childhood, I did what any intelligent child would do -- I found a new set of parents. They're the people I call my "real parents" because I often escaped to their house for glimpses of what storybook families do. Fortunately these folks like to consider me to be their daughter. When I was growing up, I could always count on "mom" for a home-cooked meal complete with some scrumptious dessert she had whipped up. (My mother stopped cooking, except for special occasions, as soon as she divorced my father.) "Dad" was the one who taught me how to drive. When I was home from college that summer and had pissed off my mom, they were the ones who let me stay with them.

Now that I have finished that explanation, let me get back to the story. I still like to stop off to see the folks because sometimes I don't feel like cooking dinner. I also needed to go over some paperwork for mom. When I arrived, dad insisted that I have a glass of wine. There was none open so I got to pick whatever I wanted. (Although I do love Chuck, I have to admit there is something appealing about being able to drink something that's at least ten times the price of Chuck.) I was halfway through a glass of Merlot when it dawned on me that peanuts and Sweet-Tarts cannot really be considered a meal. I think they must have realized my lack of food. I don't know how. I tried my best not to slur my words. That meant that I, of course, had to stay for dinner. And what goes better with steak than another glass of Merlot? Besides the wine, the other great part of my visit was a belated housewarming gift. Mom said that she had thought about buying something but then decided that I would appreciate cash much more. Have I mentioned how much I love these people?

The really good thing about work is that my boss told me today that I can come in an hour late. Oh, and because I have to work really late tomorrow, she said that I can take a two hour lunch. Life is starting to look very good.
Posted by Dagny at 10:19 PM No comments:

I thought this was a holiday

Yesterday was one of the longest days ever. I had to work the booth at KidFest yesterday. Oh, and Gloria, there were plenty of cute little kids around. The only good thing was that we could see the entertainment stage perfectly from the booth. The other highlight was that McDonald's had the booth next to ours. Ronald invited my co-worker and I over to take a picture with him. (He had been taking photos with kids up to that point.)

I'm up so that I can head to work again. Yes, that's right work. I went by a barbeque that a relative had after working yesterday. When they found out that I have to work today, they asked what was wrong with the people I work for. My answer? Crack. It's gotta be that or some other drug. Are the malls even open today? That's how I gauge how serious a holiday it is. If the malls are closed, then most people, including myself, should have the day off.

I have the distinct feeling that today will be even longer than yesterday.
Posted by Dagny at 8:00 AM No comments:

The item at the top of my list was to find an apartment that I like in Berkeley. Done that. Now it's time to try to take care of some of the other things. I've always been fascinated by language and have wanted to learn more.

I was checking on my mom's house when I came across the catalog for Adult Education. It dawned on me that I should check Berkeley Unified to see if they offered something similar. They do. I thought to myself, "Now I can sign up for a Portuguese class." Then they burst my bubble. Apparently they offered Portuguese in the Spring but will not be offering it in the Summer. I really do not feel like taking another class in Spanish or Italian; I could use the refresher though. I started looking through the list to see if there was something else. Unfortunately ballroom dance does not fit into my work schedule. Same goes for ice skating and the intermediate hand knitting classes. So what have I decided? I'm thinking Arabic. It fits into my schedule and when my relatives come to visit this summer, I'll actually have someone to practice with. (Don't ask. That's another story.)

I guess if I actually go through with it, then in the fall I'll have to start planning that trip to New Zealand -- something else I've wanted to do for years. If not, I guess I'll just make do with the books I purchased years ago when I briefly thought of trying to learn Russian. Hey! And I have someone with whom I could practice at work. So what if he has this creepy sex maniac air about him? Scratch that thought. Guess it's Arabic or wait until Fall when they hopefully offer Portuguese again.
Posted by Dagny at 8:00 AM No comments:

So I waited around yesterday for the maintenance guy. I then get a voicemail saying that he wouldn't be showing up until 9 a.m. today and if it was an emergency, I could call a plumber and have them bill the property managers. That all sounded like too much trouble until the nasty black water starting spilling out of the kitchen sink all over the floor. I went to check in with my neighbor. Lo and behold, the owner of the building was there with some other guys. In between watching him mop up all the water off my floor and counters, I did a little net surfing.

At a stressful time like this, there is only one thing to do -- check out some more online quizzes. I just couldn't resist this one. I've always had this love/hate relationship with Barbie.

You're Exotic Dancer Barbie. You have some moves,
and will do anything for a few bucks. Take it
off girl, but keep it PG-13 please.


If You Were A Barbie, Which Messed Up Version Would You Be?
brought to you by Quizilla
Posted by Dagny at 10:45 AM No comments:

So I finally have a day off. I had all these great plans. Then I woke up and saw that it was overcast and dreary. Why does this always happen? All week it's been sunny and warm. Why can't it be this way when I'm not trapped at work? So unfair.

I needed to head to the library because they were holding a couple of books for me. I finally came to my senses and realized that there is no need for me to spend money that really should be spent on cocktails on the latest in chick lit.

Actually the money should be spent on buying snazzy outfits to wear while sipping cocktails. I have issues about paying for cocktails. Which of course makes think of the wonderful folks at Jeremy's. I made the mistake of signing up for the email list. Now they taunt me with things like a Christian Dior gown that retailed for $6,975, was marked down to $1,498 and now is on sale for $902. OK. I'm not really that wild about the dress. It's just the idea of a major sale. 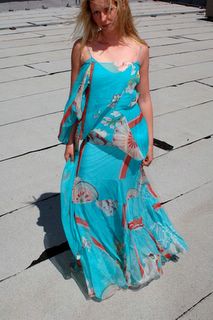 I wasn't going to post a picture of the dress, but then I realized that some might actually want to see it.

Back to my lazy day. I kept trying to get motivated to go pick up the books at the library but then I was sucked in by cable tv. First it was Queer Eye and Perry Mason. I was trying to decide what to watch next when I heard a strange sound coming from the kitchen. I went into the kitchen and was greeted by the site of nasty looking water standing in the sink. It got worse. My neighbor turned on her garbage disposal and more of the nasty water started coming into my sink. It was about to overflow so I countered by turning on my disposal. Finally we both turned the disposals off at the same time. I promptly went over to her apartment. (Well not too prompt. I did have to change out of my pj's into some respectable clothing.) We had a chat about the water. Apparently on her side the water had indeed gone over the top of the sink. I called maintenance. They are supposed to be coming sometime this afternoon.

Luckily the maintenance guy was at lunch when I called and would be for another half hour. That gave me just enough time to run to the library to pick up my chick lit. I mean if I'm going to be stuck here waiting for maintenance, I am going to need more entertainment than the internet and cable tv.

The walk, per usual, was quite entertaining. I must remember to carry a camera with me at all times. On my way to the library, I passed by Body Time. There was a garbage truck parked across the crosswalk in front of the store and two guys, who looked like they belonged with the truck, busy smelling samples of lotions and oils inside the store. I sooo wish I had had a camera.

What makes this all worse? The minute I get home with my books, the sun decides that it really does want to make an appearance today. Story of my life.
Posted by Dagny at 1:28 PM No comments: