After I wrote the title to this post, I instantly thought of Quinn's ... but this is not that kind of post. However, if you are ever in Oakland on a Thursday night, you should check them out. Nothing like a Thursday night at Quinn's.

I have spent this weekend being clawed in various ways. Currently Boris is sitting next to me as I type. I would move him but I still have the memory of claws in my back a couple of days ago as I sat at the computer. Actually I think the wounds have just started throbbing once more. This is all while the little bugger is trying to put new wounds on me.

I would like to think that I have had a highly productive weekend.

1) I started on my new exercise regimen. Denise Austin kicked my butt. A co-worker (my former boss but now she's been promoted) said that Denise is old school. I really don't care. All I want is someone who inspires me to get off of my butt and to exercise. The kittens thought that I was playing with them. Natasha quickly realized that I wasn't but Boris as quick. When I started doing crunches, Boris decided that it was a good time for a nap -- on my stomach. There are no pictures of this which caused my aunt great disappointment. I thought about quitting but then decided that if it wasn't bothering him, I would just keep going. Under the Denise plan, Sunday is a day of rest. It wasn't one for me but I'll get to that later.

2) I cleaned like a demon. On Thursday night I ran into my neighbor and one of her friends on the way into the building. They ended up in my place. I was ashamed. I awoke early on Friday to clean and ended up doing five loads of laundry. I also put the back issues of cooking magazines in their proper place. 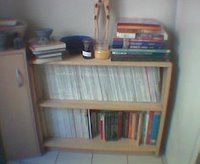 3) I stopped by my mom's house. She has returned to Mexico and the soonest that I will see her is March. That's only if she decides to file her taxes on time. Otherwise, I won't see her until next summer. I am hoping for the latter. As the house is basically unoccupied, she asked me to unplug the refrigerator. This means that I did some shopping from her fridge before I actually went shopping. The best item was a pound of frozen Blue crabmeat.

4) I went shopping. I got the kittens more food and picked up a few items for myself. On my Saturday out, I stopped at Bevmo and picked up this cute glass with my Bombay Sapphire. I think I'll have to get at least one more because I think that glasses should be in pairs. 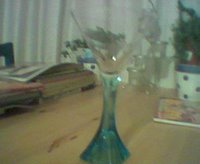 5) Before I went to BevMo, I stopped at OSH. I had been thinking of painting my bedroom. Then I discovered that they had paint on sale -- and the last day of the sale was Saturday. That meant I had to buy the paint right then and there. Once I got the paint home, I realized that I had to paint immediately. If I didn't, I would have to wait at least two weeks before I had time to paint. I think the color is really pretty. I'll post another photo once the furniture is back in place. 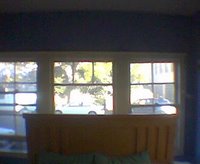 6) I remembered after painting that I wanted to go to the library today. They're holding an item for me. Unfortunately I remembered this about five minutes before closing time and it takes me at least ten minutes to walk to the library.

7) I am sitting here typing this list of things while getting ready to head out to a friend's going away. She's a post-doc, like my neighbor(actually I met her through my neighbor). She has accepted a job in Australia. I have already begged her to take me with her. So now I have to head off for one more appeal...
Posted by Dagny at 7:31 PM