As promised, here is the dress. 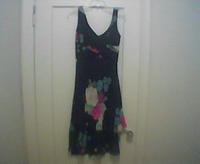 Fortunately the party was as fabulous as the dress. Unfortunately I had to leave the party at 1 a.m. -- the misfortune in going with my neighbor. However, she doesn't drink much (one drink the whole night) so she was the designated driver.

I was accused of being Brazilian (sorry but I just started learning Portuguese a few weeks ago) as well as being Cuban. What I really regret is not getting a picture of the guest of honor from New Zealand. The man can mix a very nice cocktail. We started off with Mojitos and then went on to Cosmos. He works in the wine industry, or perhaps it was food. I think I have met my future husband.

Women at the party asked what was my secret as I have obviously tapped into some fountain of youth. I told them the secret was Ivory soap, lots of drinking and smoking, and an attempt to eat as healthy as possible. I will also curtail the party scene if I feel that I need more sleep. Be warned though. I sleep no more than six hours a night if I am not sick. As the saying goes, "I'll sleep when I'm dead.'

I think I'm going to crawl back to the futon and clutch the remote. My head is killing me. If only the kittens would stop running across me.
Posted by Dagny at 9:36 AM