Why I don't own a dog

So as you all know, I spent this past weekend dogsitting. Here are the culprits. 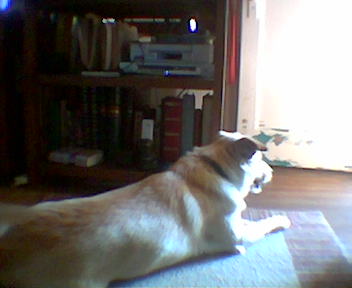 This is Meadow. I could never get a picture of her face because whenever she was facing me, she was too busy trying to lick my hands. 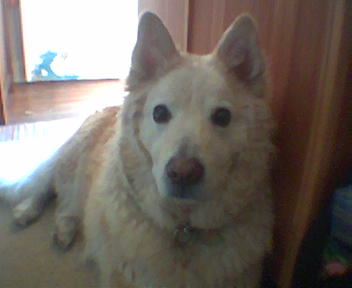 This is Gabe. Isn't he pretty?

Gabe is the traumatized dog. He used to belong to my friend's mom until about a week and a half ago. My friend's mom was diagnosed with lymphoma a few months ago -- on my friend's 45th birthday -- and she had just had her first chemo treatment. My friend called her mom to see how she was doing but got no answer. After a couple of hours, she sent a neighbor to check. Her mom had had a heart attack and was dead. Gabe was there with her.

After my friends returned on Monday, they shared their nicknames for the dogs -- Dumb and Dumber. I had figured this out by that time. I shared with my friends that they no longer had to worry about whether the dogs would get along. My evidence was Meadow's incessant licking of Gabe's face. Also Meadow, cheap slut that she is, kept rolling onto her back so that Gabe could sniff her goods. The final straw was when Gabe kept trying to mount Meadow. This would be in the den where I was trying to watch movies on DVD. The den is small. They were almost on top of me. Ewwwwwww!!!! 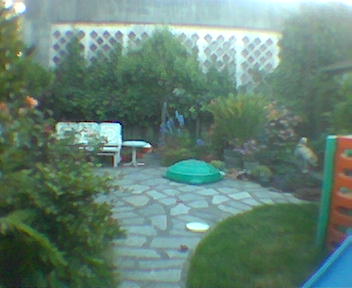 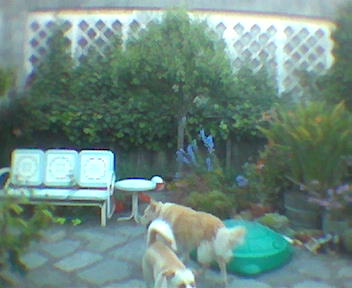 I've always loved my friend's house. If I had a house, I would want one like it. One of the best parts is the backyard. It was pretty nice weather so the dogs and I spent many daytime hours in the yard. The dogs played while I smoked and drank red wine. Ah ... this is the life.

Well, it would be if it wasn't for Friday when I had to clean up dog poop. And not just any dog poop. Runny dog poop. The dogs had been hanging in the garage while I was at work. Fortunately that was the last poop cleaning session I had the entire weekend.

Then there was Sunday when their neighbor showed up to scream at me about how the dogs had been barking too much over the weekend. I have heard tales about these neighbors for years. Oh, and the guy came by at 9 a.m. on Sunday. When I told the tale to Jade, she said that she would have slammed the door in the guy's face. I told her that was not necessary since I had never opened the door. (The door is wood and glass. Lots of glass.) This guy looked like someone who should have been on Jerry Springer -- greasy, stringy hair and missing some teeth in the front. There was no way in hell I was opening the door. On Monday after I moved my car out of the driveway, the neighbor came to apologize. He said that he realized that he had probably scared the hell out of me. When he got home on Sunday, he looked in the mirror and realized how scary he looked. His words were, "I looked like a hobo and here we are only a few blocks from the ho stroll." (Have I mentioned how much I love urban living? Really. No joke. I love it for these random interactions.) On Monday I thought to myself, "This is cleaned up? Not really seeing a difference." He then gave me an abbreviated family history. Lots of crack addicts and folks with records. Enough said. He was grilling tritip so later in the day he brought me a plate of food as a further apology. I was afraid to eat it but smiled and said, "Thank you."

Speaking of food, I decided on Saturday to torture the dogs. Sure my friend said to help myself to the food but she's only a few blocks from KC's. I haven't been to KC's in years and wanted to know if the meat was still good there. 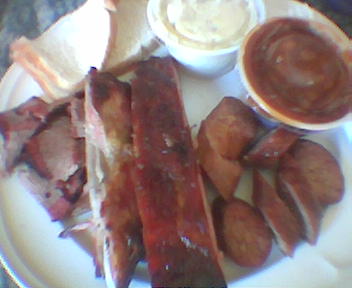 I ordered the sauce on the side because it is my feeling that good barbeque should be able to stand on its own without sauce. It was all quite tasty. I don't think that they make the best sauce but it is passable. Oh, and what's on the plate is only about a third of the meat that came in the combo. Unfortunately, the little cups of potato salad and beans (the only side dishes they make) were supposed to go with all that meat. What I also like is that KC's hasn't gone all new-fangled on the bread. To me, barbeque has always meant squishy white bread. Cornbread is OK but it is not as effective in sopping up sauce. Any other kind of bread besides these two choices just seems completely Yankee to me. (By the way, the same choices apply to fried fish -- snapper and catfish -- if one decides to have bread. Of course with fish the natural choice is hush puppies.) So basically, I was one happy camper and able to torture the dogs for more than one meal.

I received my payment for the weekend so now I can pay rent and go out this week. (Remind me to rant about how I hate how my current job only pays once a month -- on the 8th. What's up with that?) I also did such a good job that my friends asked if I would be available for Labor Day weekend. My plan is to be in L.A. that weekend to help celebrate Kate's birthday. I might try to meet up with at least one other blogger that weekend as well. I did tell them that I had a possible replacement to recommend though.

Right now I'm just happy to be back with the kittens. I don't think I will ever have dogs -- well, at least not dogs that size -- unless I have a large piece of land.
Posted by Dagny at 6:59 AM