Getting ready for duty 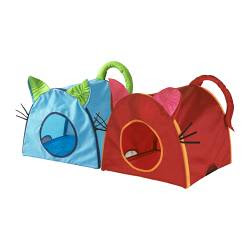 Back in April, I bought this item in blue when I was at Ikea with my mom. The cats did not seem to take to it. Most mornings I awoke to find it collapsed on the floor. Now apparently Natasha has claimed it as her own. Last night as she was exiting, I discovered why. I found a pen and one of my lighters hidden in the tent. I will have to be more vigilant with my belongings now I see.

I awoke yesterday morning with the best of plans once more. I was going to do something I hadn't done in some time -- go to the movies. I narrowed down my choices to Fay Grim and Waitress. Waitress won out since Fay Grim will be on DVD on Tuesday. (And I'm really excited about it now that I know it's the sequel to Henry Fool, one of the many movies I own.) The big problem is that Waitress is not playing at one of the three theaters near my home. I was going to have to drive. And I goofed on the start time of the movie. By the time I was ready to go, it was fifteen minutes to show time. So I decided to put it off. Maybe next weekend.

And speaking of next weekend, I have signed up for duty once more. Yep, next weekend I will be watching Dumb and Dumber once more. There have been additions to the house in the form of fish. So last night I went by to receive my directions. This was after a stop at Michael's to buy the various art supplies I would need this week in order to get ready for open house.

Have I mentioned how I wish it was Friday already? Well, I do. Even if it means a weekend filled with Dumb and Dumber. Because for the first time in weeks, the boy should be in town for the weekend. And I'll be getting paid for watching the critters.
Posted by Dagny at 6:18 AM