It seems that I have been the queen of bad planning this week. First, I had planned to do laundry on Sunday. After returning home from Andronico's, I discovered that I was out of detergent. I didn't have the energy to return to the store so laundry was put off until Monday. On my way home Monday evening, I stopped at Andronico's for more detergent. (They seem to be the only place around that carries my favorite brand.) So I got the laundry going and had every intention of making a pot of chili. It seems that I forgot to check to see if I actually had any kidney beans around. Because there were none to be found in my kitchen. This meant another stop at the store last night. And since I was in Berkeley Bowl and the crack cheese costs less there than it does at Andronico's, of course I had to pick up another wedge of that. To go with the duck liver and truffle pate I had picked up at Andronico's on Monday when I went there for the laundry detergent.

So finally last night I was ready to start cooking. I had thought of blowing off the whole chili thing but then I reminded myself that I had mentioned it to a coworker. He's expecting me to bring some in today. So the chili had to happen. 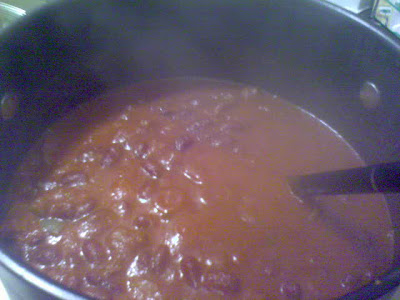 And then there was that other treat that I had picked up at Andronico's on Sunday -- boneless whole trout. I think Berkeley Bowl is the only other store that carries it. I remember that this is the first thing that I cooked that made Natasha believe that the oven was her own personal television. 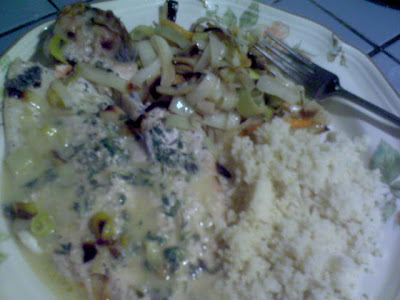 I almost didn't post this photo. I kept thinking that it didn't look all that attractive, in my opinion. But I decided to anyway. Because it tasted really great.

Oh, and it's poached in reisling and topped with sauteed carrots and leeks. Oh yeah. And fresh thyme and some bay leaves. And there's something about trout that just screams couscous to me. I was bummed to discover that I did not have any pine nuts around to throw in the couscous. Next time.

My apologies for making some of you hungry. I'll have to warn y'all though. There may be a lot more food happening in the upcoming weeks. Because cooking is one of the ways in which I relax.
Posted by Dagny at 5:41 AM